FAYETTEVILLE, Ark. (KFTA) — The City of Fayetteville is pushing to make room for an entertainment district downtown after a new state law was passed authorizing the right for businesses to serve alcohol off-premise in public spaces.

If the idea of an entertainment district passes through Fayetteville City Council, it could stretch from Dickson all the way to the square. 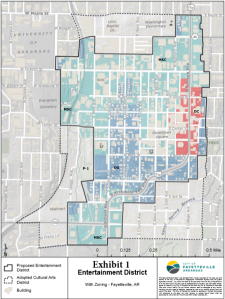 “Fayetteville is beautiful, I love this place. It’s like a top five place to live in the country but it could always be better, right?” said Richard Tolleson, the general manager of JJ’s Grill on Dickson St.

Improving the quality of life is exactly what the City of Fayetteville wants to do, with the construction of an entertainment district.

“It’s just part of a 21st century downtown,” said Garner Stoll, the development services director for the city. “It’s where people want to be.”

Stoll said on Tuesday, Fayetteville City Council will vote on both the map the city has outlined for the district as well as how it will implement the new rules.

“We’re proposing to allow off-premise consumption of alcohol when there are special events with closed streets with one exception; We also allow sidewalk cafes,” he said.

JJ’s Grill sits right next to the sidewalk on Dickson St., so this sparks the interest of Tolleson.

“It’d be cool to be able to sit on the sidewalk and drink and just see the passerby’s and all that good stuff,” he said.

Stoll said, “Under the new law, we are proposing to allow just those businesses to take the tables into the sidewalk space, and they can serve alcohol in that space. Not carry it off-premise, but in that public space, without having a silly little fence around it.”

While Tolleson is thrilled at the idea of a larger attraction to downtown, he does have one concern.

“Most of our demographic is college students so it could get a little wild at times if they’re just open to the street,” he said.

Although the new rules, if passed, could remove physical barriers between restaurants or bars and sidewalks, Stoll said there’s still a structure in place to prevent things from getting too crazy.

“The city would issue for a permit for that sidewalk cafe and it will show where the tables are going to be located and make sure the sidewalk is still open for pedestrian traffic,” Stoll said.

Tolleson said this could put the City of Fayetteville on the map.

“We’re kind of tucked away in the state,” he said. “We’re known for the U of A but it’s just good to have more people and tourist attractions, you know? That’s just another draw.”

You can voice your opinion about the proposed entertainment district at the next city council meeting on Tuesday.

FAYETTEVILLE, Ark. (KNWA/KFTA) - Health officials urge you to get a flu shot this year hoping to prevent a "twin-demic"- meaning outbreaks of both COVID-19 and the flu but a new study suggests there could be another benefit to getting the flu vaccine.

With cases rising across Arkansas, many are still waiting on a COVID-19 vaccine, but, there is some interesting preliminary data from the Scientific American which suggests the vaccine may trigger a general immune response possibly protecting you against the coronavirus.

Since the first day of school, the playgrounds were closed due to coronavirus concerns, but on Friday, October 30, students were able to play on the equipment again.

ARKANSAS (KNWA/KFTA) — There have been 674 nursing home deaths in Arkansas related to COVID-19, and more than 7,400 cumulative cases since mid-March, according to the Arkansas Department of Health's report from October 23.

Trump pitches ‘back to normal’ as Biden warns of tough days

Weather Blog: Spider webs all over everything today

CDC lifts ban on US cruises

SEC Predictions for Week 9 Including Arkansas at Texas A&M