LITTLE ROCK — The Arkansas Razorbacks have only a few more days of limited practices before ramping up their on-court practice time and instruction the following week as they increase preparations for the 2022-23 college basketball regular season that is now just seven weeks away.

With four hours of on-court practice time upcoming this week, the Hoop Hogs will work on execution and cleaning up various phases of the game, according to a source.

It remains true that head coach Eric Musselman’s practices are intense and fast-paced with attention to detail, something that a couple of top-shelf 2024 recruits and weekend visitors observed while attending Saturday’s practice.

“The intensity and attention to detail is what stood out the most,” said Dallas “Slim” Thomas (6-8 wing, Little Rock Parkview, ESPN national No. 33 / 4-star prospect), who was on his second unofficial visit to Arkansas in the past year.

Given that the Razorbacks had 10 full practices in late July prior to their 10-day, 4-game exhibition tour through Europe in early / mid August, it probably benefited the team to go back to limited practices for a month upon returning to Fayetteville in order to not burn out — whether physically or mentally, or both — with a long season still ahead of them.

Fresh legs and sharp minds go a long way toward keeping practices intense with players focused on the details.

* Rotation ramblings. Having gone back multiple times to review the two open-to-media practices followed by the four Euro exhibition games, it seems likely the five Hogs in line to receive the most game-to-game minutes are Nick Smith, Jr., Anthony Black, Trevon Brazile, Ricky Council IV, and Devo Davis. That’s not a prediction on a starting five, but rather a notion about who gets the lion’s share of clock. Sorting out who rounds out the top 6-8 rotation, as of now it appears to come down to the quartet of Jordan Walsh, Kamani Johnson, Barry Dunning, Jr., and Jalen Graham. Freshmen Walsh and Dunning give the Hogs depth on the perimeter and flexibility as 3/4-combo forwards to play the 4-spot in small-ball lineups, while senior forwards Johnson and Graham offer size and depth on the interior.

* Frontliner coming on. After being out of the top rotation in Europe, Graham (6-9 senior forward, transfer from Arizona State, second team All Pac-12 in ’21-22) continues to make strides of late in practices, according to sources. He had at least one big performance two weeks ago — a source said Graham “dominated” during one practice session — and apparently he’s continued to progress with some consistency. As a Sun Devil, Graham used a blend of plus-defensive play and 15-feet-and-in offensive craft to earn his all league honors a season ago. It’s a bit premature to suggest Graham is a lock for a big role, but he’s moving the needle in a positive way.

* Barry impressive. The 6-6 Dunning was active, productive, and steady while minimizing mistakes as he carved out a Top-8 rotation role in Europe, and sources say he continues to push for a meaningful role as a freshman based on his consistency in practices since the Hogs returned to Fayetteville. In four games in Europe, he averaged 7.5 points (65.0% field goals, including 1-of-2 from 3, and 3-of-6 free throws), 3.0 rebounds, 1.3 steals, a team-best 1.3 blocks per game, and ONLY 1.0 turnover per outing.

* Two-headed point guard? It’s Smith and it’s Black, and there is plenty of motivation for Musselman to make sure the offense runs through both. Smith offers the most value in terms of a dual score/facilitate threat, while Black has arguably the best court awareness, timing, and vision as a passer that you’ll find in college basketball with the size and athleticism to thrive as a slasher and rim runner, both on and off the ball. Striking a balance of when and how often each plays on the ball while they’re on the court together to maximize their value will be key, especially given they’re likely to spend a lot more time in the same lineup than not. Opposition matchups, the personnel on the floor with them, and other factors will help inform Musselman in this endeavor, but the point is that both should be in the plans to run the offense, not one or the other.

* Shield and hammer! Musselman released a practice highlight via Twitter on Wednesday, Sept. 14, showing Black on a coast-to-coast drive during which he edged slightly ahead of his defender, used a subtle hesitation to cause a bit of contact with that trailing defender for a ricochet effect, and then kicked into another gear for more separation to finish the drive through the middle of the paint for a dunk (highlight linked here: https://twitter.com/EricPMusselman/status/1570116227904700418?s=20&t=7eItCQoXCCq33r7xgr9bpQ).

* Surfs up, Muss. Representatives from the Maui Invitational shipped out customized surf boards to each of the eight teams that will participate in the 2022 event (Nov 21-23), and Musselman was seen posing with Arkansas’ surf board at a recent Football Hogs’ game (pictured below).

Photos below via Arkansas men’s basketball … 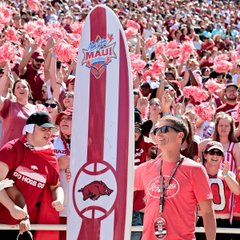 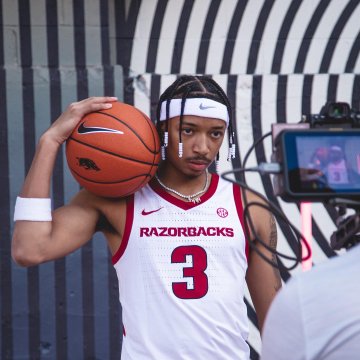 Pelosi criticized for not setting vote on stock trading …

Purina Presents: Meet Roxy in Pet of the Week

One man is on a mission to interview every World …

Public meeting on I-49 development in Alma

Pelosi criticized for not setting vote on stock trading …

Escapee stole $700,000 while in prison: indictment