LITTLE ROCK — Move over ’80s pop band Thompson Twins (remember them?), there’s a new set of twins bearing the same last name that have popped onto the collective radar of Arkansas Razorbacks fans after Hog coaches offered scholarships to the playmaking 2022 brother tandem this week.

Amen and Ausar Thompson — both junior 6-6 combo guards at Pine Crest School in Fort Lauderdale, Fla., and both ranked in 247Sports’ national Top 50 — picked up their Arkansas offers on Monday.

Marcus McGee, owner of Marcus McGee Basketball and director of Florida Pro Basketball independent grassroots program (for whom the Thompson twins play with in the spring and summer), explained Tuesday how the Razorbacks came to offer the talented backcourt duo.

“I was the former director of Each One Teach One (the Nike EYBL program), so in 2015 which was my last year with E1T1, Ben Simmons was there,” McGee said. “That was when (Arkansas associate head coach David) Patrick was recruiting him to LSU. That’s how me and Coach Patrick met.

“Coach Patrick actually called and made the offer last night, so he’s the one who communicated with the boys.”

McGee also described how to best tell the identical twins — originally from Oakland, Calif., before making their way to South Florida — apart on the basketball court.

“Ausar is more of the scorer,” McGee. “He shoots more three’s, he looks to attack more, and he does look to score more because he puts up more three’s than his brother. Then Amen is more of the ball-handler, facilitator, he’s usually the lead guard. Doesn’t shoot a lot of three’s, but he’s good in the the mid-range and getting to the basket, leads the team in assists. He’s a little more tricky and shiftier than Ausar with his ball-handling.

“The way they play defense, the way they hustle, and their IQ really set them apart from other kids. Other coaches say they are the best players in the country in terms of turning defense into offense. Hard-working, great kids off the court, and they go to a high academic school so they are challenged every day mentally and academically.”

In addition to the Razorbacks, both hold offers from Kansas, Arizona, Alabama, LSU, Florida, Florida State, Oklahoma State, and Iowa State among others.

“The recruiting process has just started for them and they’re looking to build relationships with coaches and programs,” McGee said, adding that most of the high-major offers rolled in after coaches were wowed while watching their game footage.

The hoops version of the Thompson twins combined for 44 points last week in a preseason win in the 4th annual Sunshine State Preseason Classic, with Ausar dropping in 26 points (including 5 three-pointers) and Amen contributing 18 points. In a prior preseason game, Ausar scored 22 points and Amen had 19 points.

The duo is long and athletic with finishing instincts, and they fit the kind of two-way (offense and defense) perimeter talent that Arkansas coaches have been courting. 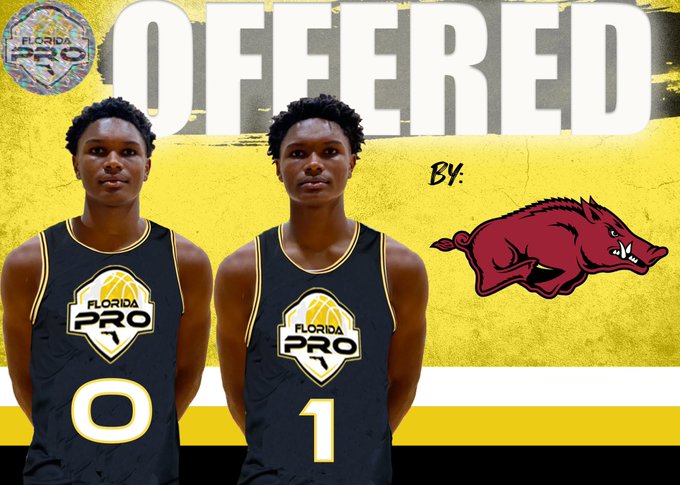 * With former Arkansas sharpshooter Isaiah Joe being selected No. 49 overall by the Philadelphia 76ers last Wednesday in the 2020 NBA Draft, combined with former Hog Daniel Gafford getting picked No. 38 the previous year in the 2019 draft, combined with former Hog and ’19-20 Co-SEC Player of the Year Mason Jones signing an undrafted free agent two-way contract with Houston last week, combined with Arkansas freshman guard Moses Moody being projected as a one-and-done first-round pick in several 2021 mock drafts (the lastest was Tuesday’s update by Sam Vecenie of The Athletic who projects Moody to go No. 16, just two spots outside the draft lottery, in his 2021 mock draft) — with ALL of that offering proof of concept that players can get to the NBA through Arkansas, could an actual Moody one-and-done journey to the league be the tipping point in bringing more national Top 50 players to Fayetteville from outside of the state and the traditional footprint recruiting territory?

Jones was instrumental in Arkansas landing 2021 Hog signee Chance Moore, who’s ranked by ESPN as the 44th-best prospect in the nation. With a coaching staff wielding a worthy resume that includes decades of pro coaching at all levels, plus the recent Hogs-to-the-NBA success, Arkansas may be gaining the momentum needed to move the bar up in national recruiting.

* With Sylvan Hills missing three starters from its lineup, the Bears have started the season 0-2 with tough losses against Little Rock Central and Vilonia, but that hasn’t stopped 2022 star Nick Smith, Jr. (6-4 combo guard) from taking his game to another level. Through two games, the nation’s No. 25 prospect (a 4-star for now but one spot away from 5-star status accoring to 247Sports.com) is averaging 29.0 points, 11.5 rebounds, and 5.0 assists. A source familiar with his recruitment reached out to Hogville.net on Monday to reaffirm that Arkansas is very much in the mix for arguably the top prospect in the state regardless of classification.

* 2022 Arkansas offer Kel’el Ware (6-11 forward / center, 247Sports.com’s national No. 32 / 4-star prospect) made his ’20-21 season debut on Saturday and had a game-high-tying 16 points (7-of-9 field goals and 2-of-2 free throws), 9 rebounds, and 2 blocks in North Little Rock’s home win Little Rock Parkview. Ware told Hogville.net that he recently had a phone meeting with Arkansas coaches.

The Arkansas Razorbacks were potentially facing another double-digit-margin loss when junior Desi Sills and freshmen Jaylin Williams and Davonte "Davis" Davis -- all playing off the bench -- sparked a comeback from a 19-point deficit for a 75-73 win Wednesday at Bud Walton Arena in Fayetteville.

Arkansas trailed by as many as 19 points in the first half and by an even dozen at the break, but an 18-4 run to start the second half was capped by Williams' one-handed putback slam to put the Hogs ahead, 49-47. The game was tied, 56-all, at the 9:10 mark when the Hogs -- much like they did down the stretch in their win at Auburn -- began winning grind-game plays at both ends of the floor for an 18-10 run that culminated in two Sills free throws at the 2:40 mark that gave Arkansas its biggest lead, 74-66.

FAYETTEVILLE, Ark. – Arkansas added another game to its schedule Head Coach Mike Neighbors announced today, as the University of Connecticut Huskies will come to Bud Walton Arena on January 28. The game will tip off at 4 p.m. CT, and will be televised on ESPN2. The Hogs were scheduled to play Vanderbilt on that day before the Commodores canceled their season due to complications related to the ongoing COVID-19 pandemic.

“We entered this season knowing cancellation of games could be a possibility, so we started early conversations with our friends in the game that had a similar desire to play the best competition possible with COVID protocols in mind,” Neighbors said. “When Vanderbilt opted out of the season Monday, we were lucky enough that UConn had a common open date as ours. A few texts and a couple of calls later, we got it all set.”

Defensive Back Darrell Wilson is a part of the football 2021 class as a Walk-On Grad Transfer from Marian University.

For the first 3 years of his collegiate career, Wilson played for the Knights in the NAIA. He was a 2 time all-conference (Crossroads League) player and had 143 tackles and 4 interceptions.

LIVE: A look at what’s next a day after Biden’s inauguration

‘I’ll kill them all’: Florida deputy accused of threatening feds at US Capitol

‘She did not die from COVID’: Son says cause of mother’s death inaccurate

One dead in overnight stabbing in Little Rock, suspect in custody

Psaki vows to bring ‘transparency and truth’ to press briefings

How to score a McDonald’s cheeseburger for 25 cents Thursday

‘Come with me if you want to live’: Schwarzenegger gets COVID vaccine, urges others to follow suit

Crews respond to fire at University of Arkansas agricultural building

One dead in overnight stabbing in Little Rock, suspect in custody